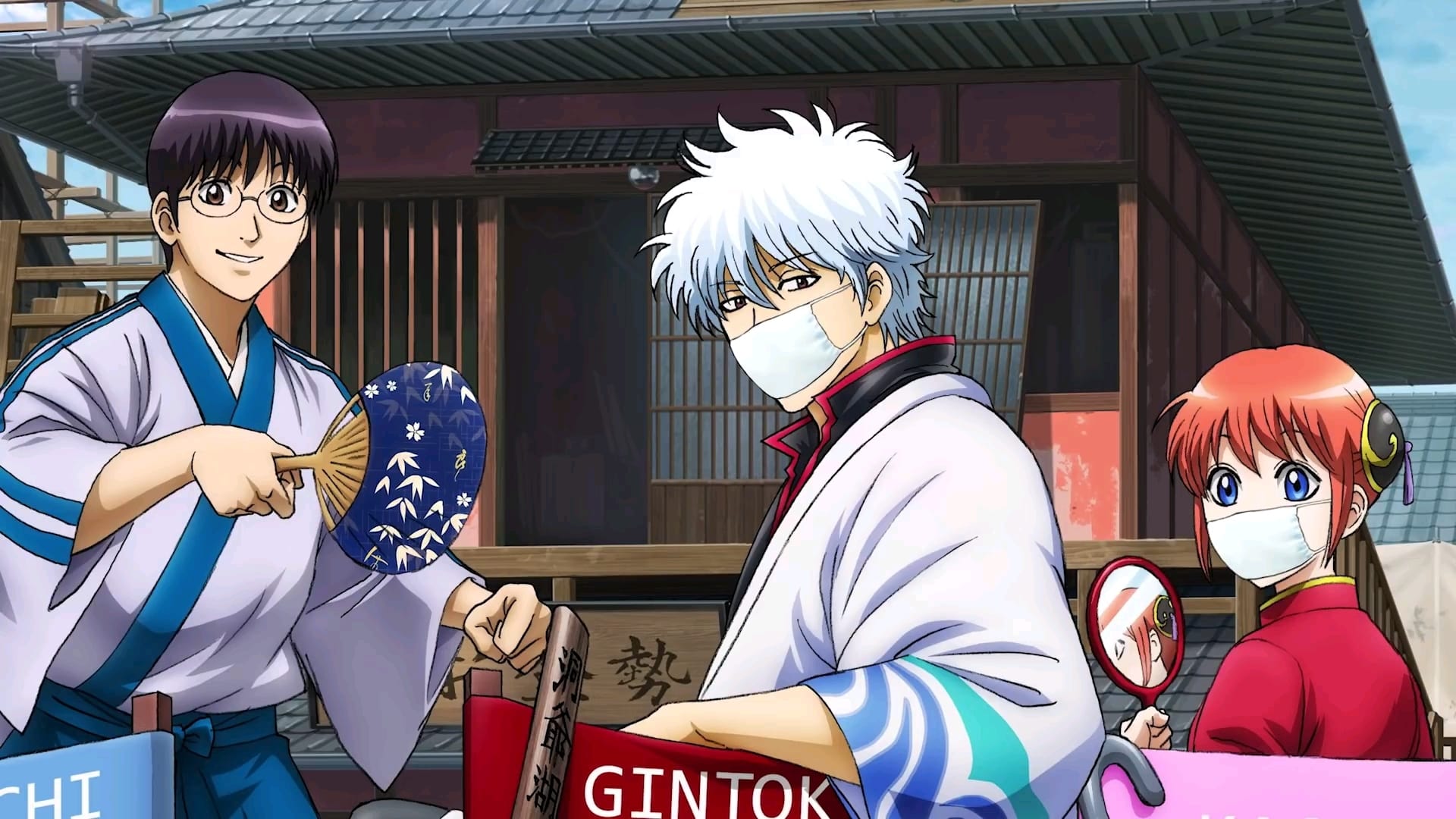 Gintama The Final (銀魂 THE FINAL) is the 3rd and final film adaptation of the Gintama anime franchise, adapting the remainder of the Silver Soul Arc from Lesson 699 – Lesson 704 along with new material. It premiered in Japanese theaters on January 8, 2021. The Insert Song by DOES is called Dorakashinju (道楽心情).

he movie begins with a summary of the key events that took place in the last two years, done in a DragonBallZ parody.

Gintoki, Takasugi and Katsura fight past the Tendoushuu forces, who have taken over the Terminal. The mothership at the top of the terminal is absorbing large amounts of Altana and channeling it into the body of the child Shouyou in order to resurrect him and obtain true immortality.

As the group is attacked, they split up into two, with Katsura holding on to Shouyou’s heart. Katsura and Hitsugi engage in a fierce battle, and the latter eventually stabs and destroys the heart, revealing that he had no intention of reviving the child; he only wanted to free Utsuro from the curse of immortality. Without the heart, Shouyou would only be able to regenerate and maintain his body temporarily.

Gintoki and Takasugi fight the Tendoushuu leaders, who are controlled by Utsuro, due to Utsuro’s blood coursing through their veins. In the terminal, the Shinsengumi, Hyakka, Oniwabanshu and the rest of the Kabukicho residents fight the rest of the Tendoushuu army, while Matsudaira shoots down the ships outside. To protect Takasugi, Gintoki falls off the ledge, but Shinpachi and Kagura jump after him. With the Yorozuya reunited, Sadaharu recovers to his original state and rescues Gintoki, and the group rushes to the top of the Terminal.

In the meantime, Takasugi reaches the Tendoushuu’s ship to find that Shouyou has been revived and killed off the rest of the Tendoushuu. Shouyou’s only wish is to put an end to himself and Utsuro. Takasugi begs Shouyou to return to Shoka Sonjuku with him.

Shouyou apologizes for not being able to save his disciples, the ones that he truly wanted to protect. As he approaches Takasugi, the latter stabs him, revealing that Utsuro’s blood has taken over his body as well. This causes a large explosion at the top of the Terminal. Gintoki is separated from the others and faces off Utsuro, now manifesting in Takasugi’s body, on his own.

Utsuro taunts Gintoki with the warning he gave two years ago – tragedy will only recur as long as humanity continues to live on. Utsuro tells Gintoki that he could hear Takasugi’s voice telling him to put an end to everything quickly. Gintoki replies that no matter what tragedy Takasugi goes through, he would never say something as admirable as that; he would only say “I simply destroy.”

Utsuro comes to a realisation that Takasugi did not stab Utsuro earlier. Instead, supported by Oboro whose blood also runs through his body, Takasugi stabbed himself. The body that Utsuro saw lying on the ground was himself. Gintoki and Utsuro fight each other, and Utsuro asks if he really wanted to cut down his friend. Gintoki responds that the people he wanted to protect, including Takasugi, are right there in his soul.

With a final stab and in a human body, Utsuro is no longer immortal and dies. He finally understands that humans are inherently empty, but because of that, they bring other people to live on within their soul and will not be destroyed even in death. Gintoki holds a dying Takasugi in his arms, who tells him that Gintoki has won again. He said that he could not let Gintoki cut down their teacher one more time and felt that he was much easier for Gintoki to cut down Takasugi, because of all the fights and bickering they had done since childhoold.

Gintoki tells him that Takasugi had won this fight because he was the one who protected both him and Shouyou, and said that he would have liked to exchange drinks with Takasugi, imagining the two of them on a boat cruising down a river. Takasugi tells Gintoki to get going because he still has people to protect. He said that the last thing he saw with his left eye was Gintoki’s tearful face and asks him not to show a dishearted look when he closes his right eye too. Gintoki smiles and tells Takasugi to wait for him in hell; Takasugi dies in his arms.